Since 1970, Notre-Dame Saint-Roch School has been a Catholic educational establishment under diocesan supervision, located in the premises made available to it by the Association des Amis des Oeuvres et des Ecoles de Saint-Roch. Although we must always think of tomorrow, it is interesting to know what happened yesterday!

This is, if you will, what we will do in this page of history concerning this beautiful building at 37 rue Saint-Roch.

In 1855, a school and a "Work of Perseverance" for apprentices and employees were created by the Brothers of the Christian Schools at 37 bis rue d'Argenteuil.

In 1877, Baron Haussmann drilled the Avenue de l'Opéra and the Rue des Pyramides. The school on rue d'Argenteuil was demolished and in 1880, it found a place at 26 rue Saint-Roch and moved there. 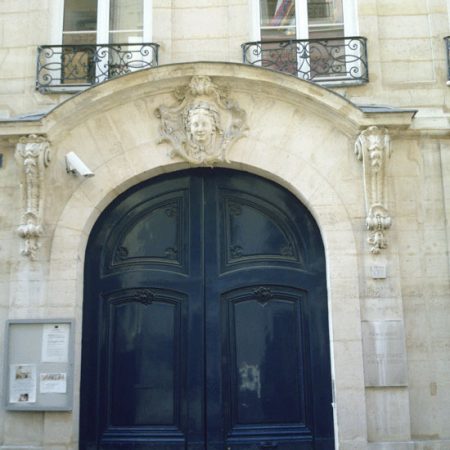 In 1888, the Brothers learned that the buildings at 35 and 37 rue Saint-Roch were being put up for sale... just opposite the 26 where they were based. Dear Brother Aguilbert wrote to his friends and benefactors, the Baron and Baroness de Gargan (the Baron was a director of metallurgical factories in Lorraine), informing them of this sale. Although very ill, the Baron de Gargan had the two buildings purchased and donated them to a company he created: the Société Civile des Écoles Catholiques de Saint-Roch. He died in August 1889. You will find the portrait of the blessed donors in the current office of the Direction... They thus continue to "live the school" with us. 37 rue Saint-Roch became, once well transformed, the first real technical school that existed in France. The school continued, with various directors, the "Très Chers Frères" of the Christian schoolsLe 37 rue Saint-Roch devient, une fois bien transformé, la première véritable école technique qui ait existé en France. L'école continue, avec divers directeurs « les Très Chers Frères » des écoles chrétiennes.

1904 arrived, it was the separation of Church and State; the Brother Director went into civilian clothes and the teachers were replaced by lay people. The transformation took us willy-nilly...until 1940: the war. Several lay directors were appointed and the school increased its numbers to 400 pupils.

In 1965, the state technical schools and colleges were born. The Saint-Roch school closed.

In 1970, it was reborn from its ashes and after a complete renovation completed in 1972, it became the Notre-Dame Saint-Roch primary school: kindergarten and elementary school with 15 classes for 400 pupils.

What vitality in this building!

Our school is located in the heart of Paris, in a former 18th century mansion overlooking the rue Saint-Roch and the rue de la Sourdière.

Consisting of a ground floor, 4 floors and an attic floor, the building has a facade on rue Saint-Roch and two wings on rue de la Sourdière.

The complex was almost completely renovated and completed in 1972.

The entrance courtyard on Rue de la Sourdière had been covered on the first floor as early as 1890, thus allowing the creation of a playground. In 1971, the wings on

levels 2, 3 and 4 were connected by metal walkways used for circulation and also serving as recreation areas.

The 5th floor (under the roof) has been preserved and the roof structure has been cleared and enhanced: this floor is used for the library and the computer room (entirely renovated in 2006).

The basement, which used to be divided into various mechanical workshops, has been cleared and transformed into restoration rooms.

The ground floor has been transformed into two kindergarten classrooms with mezzanines, plus a reception room, all overlooking the so-called monumental entrance hall. The 1st, 2nd and 3rd floors have one class in each wing and two classes in the central building, except on the 2nd floor, where a room is allocated to the Management.

All the classrooms (safety considerations) open either onto one of the two staircases or onto the courtyards and terraces on each floor.

The most architecturally outstanding parts of the building are :

LET'S GET TO KNOW EACH OTHER!